Ukrainian authorities are ignoring the Internet as one of the most important weapons of war. Unfortunately, Russia, which has been conducting an open war against Ukraine for three months now, is working in this field professionally. It is investing considerable resources to conduct propaganda in the social networks.

The most recent example is the distribution today of the pseudo testimony of an alleged doctor from Odesa, a certain Igor Rozovsky, who reports that as he was trying to assist victims from the trade union building in Odesa, militants prevented him from saving the life of a wounded victim and supposedly told him that he and other Jews of Odesa would soon share the same fate. END_OF_DOCUMENT_TOKEN_TO_BE_REPLACED

END_OF_DOCUMENT_TOKEN_TO_BE_REPLACED

Most of those detained for participating in the riots in Odesa on May 2 are citizens of the Russian Federation and residents of Transnistria, reports UNIAN, citing sources at the Ministry of Internal Affairs of Ukraine. END_OF_DOCUMENT_TOKEN_TO_BE_REPLACED

A pro-Ukrainian rally in the Ukrainian city of Odesa today, May 2, turned violent when pro-Russian separatists began throwing stones at marchers. The clash continued in the Kulikovo field and the Odessa trade union building was set on fire by arsonists. As a result of the fire, 31 people were killed. During the clashes, 4 people were killed and 15 were injured according to the Interior Ministry.

About a thousand activists with Ukrainian flags gathered in Odessa’s Cathedral Square. Football fans were also planning to take part in the march. Not far from their gathering place, there was a small number of police officers. Activists shouted slogans such as: “Glory to Ukraine! Glory to Heroes! Glory to the nation! Death to the enemy! East and West together!” as well as anti-Putin chants.

END_OF_DOCUMENT_TOKEN_TO_BE_REPLACED

During Euromaidan protests in Odesa, many social media users were touched by a photo of a lone veteran with a Ukrainian flag that could hardly move along Odesa’s Soborna square. 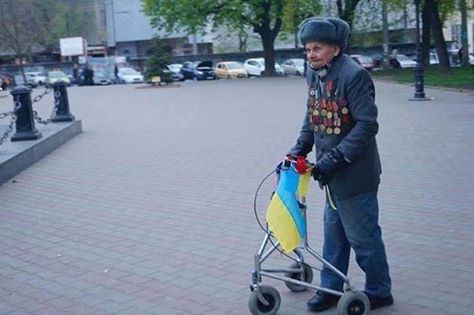 Odesa volunteers and other Odesites that cared found the grandfather. He turned out to be a WWII veteran, Konstantin Plotnykov. A campaign started for gathering donations to buy him an electronic wheelchair, and recently the present was given to him! “I am so surprised, I never expected to receive such a present…” commented Mr.Plotnykov. END_OF_DOCUMENT_TOKEN_TO_BE_REPLACED

The Security Service of Ukraine has arrested members of an extremist group in Odesa who were planning scenes of violence for the benefit of Russian TV. As reported by the SBU press service, April 25, this group called itself the “Rapid Response Brigade” and has been active in the Odesa area since April this year.

END_OF_DOCUMENT_TOKEN_TO_BE_REPLACED

On December 15, 2013, civic activists, famous artists and ordinary citizens recorded the anthem of Odesa’s Euromaidan. The power in their words shows how Euromaidan was able to win under all the dire circumstances. The Euromaidan activists talk about smiling for the Duke. The ‘Duke’ is the first monument in Odesa, erected in honor of Duke de Richelieu, the first mayor of Odesa. The song is in both Russian and Ukrainian.

END_OF_DOCUMENT_TOKEN_TO_BE_REPLACED

More than 10 thousand people have marched against war and for a unified and peaceful Ukraine in Odesa on March 30, 2014. The activists have spread a kilometer-long flag of Ukraine on the famous Derybasivska street and Prymorskiy boulevard! “One, united, unified Ukraine!” was the main slogan of the march. END_OF_DOCUMENT_TOKEN_TO_BE_REPLACED

Anton Raevskii, a Russian citizen from St. Petersburg and founder of a Russian fascist organization, is an active participant in separatist rallies in Odesa, reports Ukrainska Pravda, March 25.

END_OF_DOCUMENT_TOKEN_TO_BE_REPLACED

Conductor of the Odesa Philharmonic Orchestra Hobart Earle, along with musicians and singers, sneaked into the fish rows of Odesa’s legendary Privoz market and staged a musical flash mob. The musicians performed ‘Ode to Joy’ by Ludwig van Beethoven, which is the anthem of the European Union since 1993. The musicians wanted to express their protest of conflicts and support Ukraine’s unity, so they selected a song with a text dedicated to unity and brotherhood. END_OF_DOCUMENT_TOKEN_TO_BE_REPLACED