After three months the new Ukrainian government has not even begun the cleans of the government system from corruption, traitors and former KGB agents, concludes the Lustration committee.

The members of the Verkhovna Rada ended up not passing the law regarding lustration in spring. Therefore the Lustration committee still remains with the status of a civil organisation, and its activists are working exclusively for enthusiasm, though after Maidan the politicians obliged themselves to give it a special state status for the carrying out of full-fledged lustration. “The new top officials did not want to break the corrupt system, but wanted to lead it instead. We have deposed Yanukovich, but his system remains and continues working, however, with new leaders,” concludes the head of the Lustration committee Yegor Sobolev. END_OF_DOCUMENT_TOKEN_TO_BE_REPLACED

Holding early elections to the Parliament is one of Petro Poroshenko’s electoral promises. In his inauguration speech, the President confined that he would not go back on his word: “The current Verkhovna Rada is not in accordance with the moods of society,” he stated, guaranteeing a full government reboot.

The rating of old parliamentary members is inevitably falling. The elections to the Kyiv Council confirmed the social demand for new political powers, and the early elections to the Verkhovna Rada of Ukraine will make this trend more noticeable. However, it frequently turns out that in practice the new parties can only be called “rookies” arbitrarily – some projects have existed for several years, and they include experienced political figures.

Forbes proposes to get acquainted with the political start-ups and their perspectives. END_OF_DOCUMENT_TOKEN_TO_BE_REPLACED

Kyiv – Taking the situation in Ukraine into account, the US and the NATO will enforce their military presence in Central and Eastern Europe, stated US President Barack Obama on Tuesday. The parliamentary majority sees this as a positive signal for Ukraine. Meanwhile political scientists say: this will not influence the situation in the East of Ukraine in any way; member countries of the NATO are only protecting themselves.

END_OF_DOCUMENT_TOKEN_TO_BE_REPLACED

Oleksandr Turchynov, acting President of Ukraine and Chairman of the Verkhovna Rada (VR), believes that yesterday’s attempt to storm the Parliament building was organized by Russia. He pointed out during his speech to the Parliament that he gave the order to dismantle the fence around Parliament, and it is now open to all citizens.

He opined that arrangements will eventually be made for anyone who wants to visit Parliament to do so.

END_OF_DOCUMENT_TOKEN_TO_BE_REPLACED 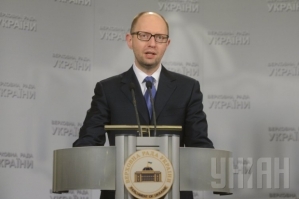 The draft law on public procurement will be considered during the extraordinary meeting of the Government, according to an announcement by Prime Minister Arseniy Yatsenyuk before a cabinet meeting on Sunday.

“This is the most corrupt sphere of Ukrainian state authority, which siphoned off up to [UAH] 300bn a year, according to various estimates. This represents the total turnover of public procurement,” stressed the Prime Minister.

He emphasized that it is the task of the Government to adopt this draft law, which must comply with the European standards. According to Yatsenyuk, all purchases must be presented online, all companies transparent, all tenders must be held exclusively upon advanced notice, all entities must be eligible to participate in the tender.

In addition, he emphasized the need to ensure public access to tender information. “The whole country should know who, on what grounds, for what purpose, and on what terms a particular tender was won or lost,” said the head of the Government.

He highlighted that this bill should be considered by the Parliament next week. “I will appeal to the Parliament to vote on this law immediately,” concluded Yatsenyuk.

Verkhovna Rada of Ukraine (Parliament) passed a law about the reinstatement of certain clauses of the 2004 Constitution of Ukraine (registration number 4163), by a constitutional majority vote. According to the UNIAN reporter, 386 out of 397 MPs registered in the session chamber, have supported this law. One hundred and fourty MPs from the Party of Regions, 89 MPs from Fatherland (Bat’kivshchina), 40 — from UDAR, 35 — from Svoboda (Freedom), 32 — from CPU (Communist Party of Ukraine), and 50 out-of-factions MPs have supported this decision. This law was voted for without the committee’s decision and at once for the basis and in general.  END_OF_DOCUMENT_TOKEN_TO_BE_REPLACED

UKR STREAM TV monitors the situation. We launched two cameras – near Parlament and the mobile camera, which is now working on the  Instytutska str. . The situation is very tense. Certainly there are wounded.