Staunton, May 3 – Only those who are in complete denial can fail to see that Vladimir Putin is a fascist, émigré Russian historian Yuri Felshtinsky says, given that “this analogy is so evident” in the wake of the Crimean Anschluss and the Kremlin leader’s own words and promotion of openly fascist figures like Dmitry Rogozin. END_OF_DOCUMENT_TOKEN_TO_BE_REPLACED

Staunton, May 4 – Because Vladimir Putin did not stop after the Crimean Anschluss, the Kremlin leader now faces a Hobson’s choice of his own making: if he expands his aggression in Ukraine, he will face a Ukrainian people in arms backed by the West, but if he does not introduce forces there, he will have dashed the hopes of those who had been supporting him. END_OF_DOCUMENT_TOKEN_TO_BE_REPLACED

Staunton, May 4 – Had Vladimir Putin accepted the Maidan’s ouster of discredited Ukrainian president Viktor Yanukovych and agreed to accept the results of the upcoming elections, nothing that has occurred in Ukraine since that time would have happened, according to a Ukrainian commentator. 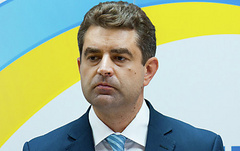 The frequency of fascist and xenophobic manifestations in Russia has multiplied and is of great concern, states Ukrainian Foreign Ministry spokesman Yevhen Perebyynis, as reported by Ukrainska Pravda, March 25, citing the Ministry’s Twitter communications.