The number of Russian military in Donetsk region is growing, according to the head of Anti-terrorist Center of the Security Service of Ukraine Vasyl Krutov, reports Interfax Ukraine. 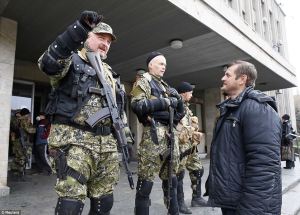 “The day before yesterday [Sunday, ed.], there were 150 of the so-called “green men,” but yesterday another 300 arrived. I am not saying how many was there before. How many there will be tomorrow remains to be seen… For those professional militants to cross Ukraine’s border is as easy as for a kid to take a trip to the cinema,” he told journalists at a military airfield on late Tuesday night. Krutov admitted that the Ukrainian military will have to deal with “highly trained and professional opponents.” END_OF_DOCUMENT_TOKEN_TO_BE_REPLACED