Kerch – In annexed Kerch, shopkeepers and customers are having difficulties with the suspension of the hryvnia. They cannot give Ukrainian coins as change in shops and supermarkets any longer, and there is still no supply of Russian change on the peninsula.

END_OF_DOCUMENT_TOKEN_TO_BE_REPLACED

A new coordination structure was created in Dnipropetrovsk on May 1: the Interregional Council of Territorial Communities of Southeast Ukraine. This was reported by the press office of Dnipropetrovsk Regional State Administration and conveyed to UNN.

The new coordinating council was created for immediate stabilization of the situation on the territory of southeast Ukraine. END_OF_DOCUMENT_TOKEN_TO_BE_REPLACED 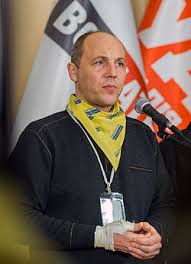 With Russian support, separatists intend to elect a president of Ukraine’s south-eastern regions by the end of April. This was told by National Security Council Secretary Andriy Parubiy during a press conference.

“Elections of the president of the republic of South-East Republic, as a parallel authority, is planned by end of April, under the concept that the South-East wants to join Russia,” said Parubiy.

According to Parubiy, intensification of separatist sentiments in South-Eastern Ukraine is predicted to happen on May 1 and 9 [Labor Day and Victory Day – ed]. In addition, Parubiy reported that Russian provocateurs now continue working at village and town councils, convincing them about the need for referendums and joining Russia. END_OF_DOCUMENT_TOKEN_TO_BE_REPLACED

We are not politicians. We are ordinary fellows from miner’s towns of Donbas and urban regions of Kharkiv. Among us there are residents Kherson plains as well as those who see pipes of the Kichkas [city district of Zaporizhzhya] every day.

Lately many people speculate about the South-East regions of Ukraine, creating a myth that this is not Ukrainian land. At the same time, no one really asks the opinion of the residents of the eastern and southern regions.

We disagree with this! We have one Motherland! We are all Ukrainians! We equally value the terricones of Snizhniy [coal mine in Donbas] and the slopes of Dnipro river, we admire both ancient Kerch and the beauty of Svytyaz lake.

You should not separate us! The South-East belongs to Ukraine! END_OF_DOCUMENT_TOKEN_TO_BE_REPLACED