Terrorists killed in action in the border areas with Russia, near the town of Snizhne, Donetsk Oblast, and in other towns in Eastern Ukraine

Terrorists killed in action in the border areas with Russia, near the town of Snizhne, Donetsk Oblast, and in other towns in Eastern Ukraine

Over the past day, anti-terrorist operation (ATO) forces have killed more than 150 terrorists in the zone of the ATO, said a LigaBusinessInform source in the ATO.

According to the source, the terrorists were killed in operations in the areas bordering on Russia, near the town of Snizhne in Donetsk Oblast and in other towns in Eastern Ukraine. “The operation continues. Liberation of the occupied territories is going according to plan. Morale of the soldiers is high,” the source said.

As a reminder, earlier the Ministry of Defense reported that Ukrainian special troops destroyed 12 military vehicles. The Defense Ministry also reported that over the past day, the terrorist side lost more than 40 militants who were transporting large quantities of weapons and ammunition of Russian origin. END_OF_DOCUMENT_TOKEN_TO_BE_REPLACED

I never thought that I would have to explain the obvious, but there are still some citizens in Donetsk who really believe in a good future for the so-called  “ “Donetsk People’s Republic”, they still consider looters and terrorists to be a “people’s militia”, and at the same time believe that the Anti-Terrorist Operation has as its purpose to clear Donbas from Russians.

The prophecy of the biblical prophet is fulfilled:

“Though seeing, they do not see; though hearing, they do not hear or understand.  For this people’s heart has become calloused; they hardly hear with their ears, and they have closed their eyes.”

To clarify the situation let’s start from recent events.

On 25 May, 2014 the gunmen of Ramzan Kadyrov, the president of Chechnya, publicly arrived in downtown Donetsk. To remind, the Chechen Republic is part of the Russian Federation. A CNN journalist managed to interview them, where they confirmed who they are and where they are from.

END_OF_DOCUMENT_TOKEN_TO_BE_REPLACED

A train with children who were being evacuated to the international children’s camp Artek from Sloviansk and Donetsk has reached the Simferopol station.

This information was passed on to the Russian RIA News agency by a chief information officer of Artek Tatyana Grygorec. According to her, from here onwards the children will travel by bus. Subsequently, the Press Service of the Ministry of Internal Affairs of Ukraine has stated that 210 children from Sloviansk have reached Artek.”

During the travel, the children were accompanied by the State Automobile Inspectorate staff, as well as parents who possessed a notarially certified permission from children’s parents to cross the border. They were taken to the train station by buses heading from Sloviansk to Debalceve (both in Donetsk oblast), and from there on they were put on board of a train heading to Crimea and passing through Melitopol (Zaporizhzhya Oblast). They had all the proper documents for traveling aboad. Right now the children are safe and sound and are staying at Artek.

Earlier on May 30, Russian media outlets reported that buses taking children from Sloviansk to Artek have been shelled by Ukrainian soldiers. The ATO’s administration have referred to this incident as to another lie spread by the Russian Federation.

END_OF_DOCUMENT_TOKEN_TO_BE_REPLACED

Ukraine’s Acting Defense Minister Mykhailo Koval has acknowledged the presence of financial embezzlement in the framework of preparation for the antiterrorist operation [ATO]. He stated this during his report in Parliament, where he was summoned by Speaker Oleksandr Turchynov upon the demand of the All-Ukrainian Union’s Svoboda faction.

In Parliament, the deputies informed Koval that soldiers’ mothers were telling them terrible things. “Children are being fed canned stewed meat with worms in it!” Batkivschyna parliamentary faction deputy Oleksandra Kuzhel said from her seat.

Former Defense Minister and ex-Party of Regions deputy Oleksandr Kuzmuk reported that within the framework of ATO, the military is not being provided with basic necessities: helmets, body armor vests, not to mention the low wages. The right of rotation is being violated; the soldiers called up for duty have been serving for three months now.

In response, Koval admitted that there has been financial embezzlement in preparation for the ATO. 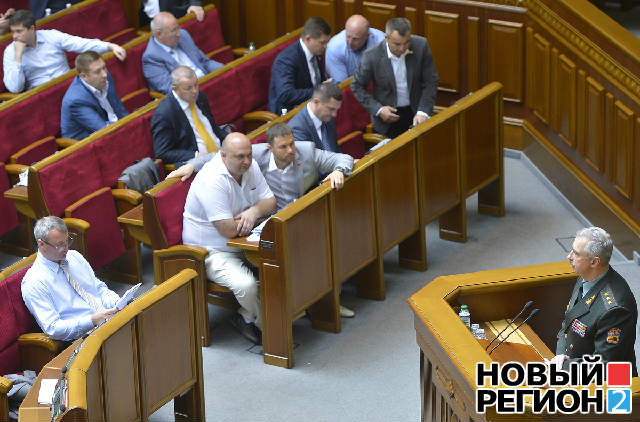 “Regarding military funding, it is received promptly. There are abuses, but we are keeping the situation under control. Yesterday, I was forced to order the removal of certain executive officers who were in charge of the armed forces’ support, and the transfer of their personal files to the public prosecutor’s office,” the Minister reported.

Koval also confirmed information provided by the deputies with respect to food supply issues in the army. “Early in the ATO the food service was, in fact, eliminated. The provision of food supplies has been organized and maintained by people who have never done it before.”

In response, Speaker Oleksandr Turchynov instructed the Cabinet of Ministers to prepare a document to double the funding for the army’s food provision, as well as increase military wages. The Speaker promised that all ATO participants would receive combatant status. 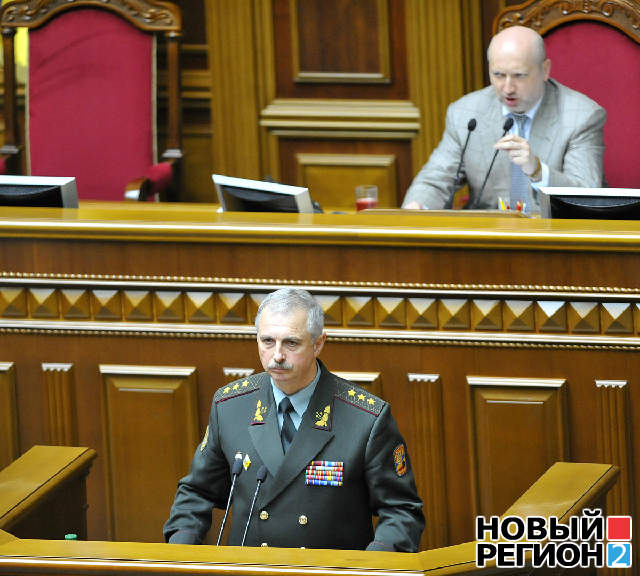 Minister Koval also assured that all military are receiving that status, regardless of the fact that “the ATO military are included and execute such orders by secret decrees”: “The orders state that they are located on the training grounds, but this is simply a technicality. All of them will be considered combatants.”

END_OF_DOCUMENT_TOKEN_TO_BE_REPLACED

“The terrorists continue their provocations. Now they are brazently firing mortar rounds in residential neighborhoods at schools, so the local residents would think that it is the Ukrainian military doing these actions,” informed Selezniov.

He said that terrorists have hit a school already. This information is confirmed by social media accounts, where photos of school #13 were posted with a broken roof above the gym. From the social media reports. the children hid in the basement. END_OF_DOCUMENT_TOKEN_TO_BE_REPLACED

This is reported by the first deputy Minister for Healthcare Ruslan Saliutin live on Channel 5. “The civil volunteer aid is always needed by our soldiers and our civil wounded, but especially soldiers,” he noted. END_OF_DOCUMENT_TOKEN_TO_BE_REPLACED

According to the Ukrainian law enforcement, the National Guard may have several tens of thousands of soldiers. One of the battalions of this department is already participating in the anti-terrorist operation, which the Ukrainian government is carrying out in the East.  END_OF_DOCUMENT_TOKEN_TO_BE_REPLACED

Acting President of Ukraine Oleksandr Turchynov is calling for law enforcement to resume anti-terrorist measures. He made the request in a statement posted on the website of the Verkhovna Rada on April 22.

Today near Slovyansk the bodies of two brutally tortured people were found. One of them was recognized at the missing deputy of the Horlivka City Council, a member of the Batkivshchyna Party, Volodymyr Rybak, who had been kidnapped several days ago by terrorists.

END_OF_DOCUMENT_TOKEN_TO_BE_REPLACED

The time has come for the Ukrainian state to act decisively, said the Prime Minister of Poland, Donald Tusk, commenting on Ukraine’s launch of the anti-terrorist operation in eastern Ukraine, reports Ukrinform.

“Up till now, Ukrainians have been acting rationally, though I don’t how they determined where to draw the red line before moving to a stronger reaction. However, I think that line has been crossed. The moment has come when the Ukrainian government must act decisively to show that it will not accept this kind of behavior,” Tusk said.