Employees of the Ukrainian Economic Crimes Investigation Service have uncovered a criminal scheme, which involved the commercial sale of American rations by the superintendent of the food warehouse of one of the military units.

At a time when Ukrainians are making an all-out effort to support the Ukrainian Army by raising funds, the superintendent of the food warehouse of one of the military units of Ministry of Defense in the Mykolayiv Region was selling American army rations through an intermediary.

After receiving information about this, Ukrainian Economic Crimes Investigation Service personnel purchased 45 sets of the American MRE rations, earmarked for the Ukrainian Ministry of Defense in accordance with an agreement between the Ukrainian and US governments. The seller was detained and the rations confiscated.

During questioning the man advised that he kept in touch with the soldier who sold the rations by mobile phone. The identity of the seller has been confirmed. He was the superintendent of the food warehouse of one of the military units. Law enforcement officials have started criminal procedures in accordance with section 198 of the Ukrainian Criminal Code (acquisition, storage, or disposal of illegally acquired property). The investigation continues.

END_OF_DOCUMENT_TOKEN_TO_BE_REPLACED 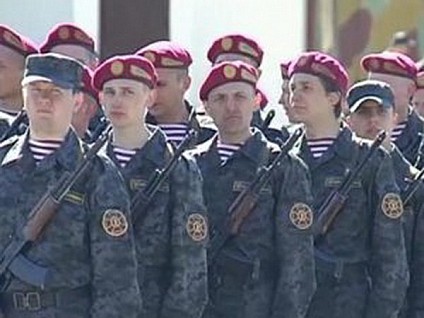 I was having a phone conversation with my friend. He returned from Sloviansk for a week. In Sloviansk, he was commander of the first battalion of the National Guard for a month. The following are a few numbers he told me about. Their battalion was stationed at ten checkpoints around the city. During the whole month, the transportable shower only arrived at each checkpoint once and only half of the troops had an opportunity to shower. Later, the shooting commenced and the transportable shower no longer came to the checkpoints. END_OF_DOCUMENT_TOKEN_TO_BE_REPLACED

Many social initiatives that emerged on Maidan are now successfully engaging in help for the Ukrainian army and the National Guard.

There are dozens, hundreds, and even thousands – within the scope of the country, – such groups. “UP.Life” chose several of the most well-known initiatives. Having made a joint effort – hundreds of volunteers and thousands of benefactors – they managed to transfer financial aid on a sum of more than 13 million Hryvnia.

END_OF_DOCUMENT_TOKEN_TO_BE_REPLACED

The Ukrainian MFA advised Russia to send humanitarian aid to the Crimea instead of Lugansk and Donetsk Oblasts. This is how Ukrainian diplomats responded to the note their Russian colleagues sent earlier.

END_OF_DOCUMENT_TOKEN_TO_BE_REPLACED

The author of this material is a soldier of the Ukrainian army who signed up as a volunteer after the Crimean events began. He asked not to indicate his name, in order to have the opportunity to honesty talk about how the service looks from the inside. Platfor.ma is publishing the volunteer’s direct speech.

I am a solider. On March 1st, when our extraordinarily brotherly friends burst rushed to spread good and flourishing to the humiliated Russian-speakers, I ran to the military commissariat and signed up as a volunteer. On May 17th I got the call, on the 18th I became a soldier. The first wave – they prepared mobilisation. It was ready and began on May 15th. Formed a group at the command point myself, went with it myself, and started serving in the Kyiv battalion together with it.

END_OF_DOCUMENT_TOKEN_TO_BE_REPLACED

SOS Request from doctors in Ukraine to anyone traveling there in the next few days.

If possible bring the following to Ukraine (items for treating gunshot wounds, heavy trauma). The items listed are not available in Ukraine, and cannot be shipped to Ukraine without special permission because they qualify as medical supplies, and are not certified in Ukraine. That is why we ask for volunteers to carry them in suitcases into Kyiv

END_OF_DOCUMENT_TOKEN_TO_BE_REPLACED

On May 24th at 12:55 pm, two Mi-35 helicopters belonging to the Armed Forces of the Russian Federation attempted to cross the administrative boundary line between Crimea and Kherson Oblast. According to the press-service of the Ministry of Defense of Ukraine, military personnel of a look-out station belonging to one of the units of the Ground Forces of Armed Forces of Ukraine, executing orders in the area of Cape Kutara in Kherson Oblast, forced the provocateurs to reverse their course by opening warning fire from an anti-aircraft emplacement. END_OF_DOCUMENT_TOKEN_TO_BE_REPLACED

This is reported by the first deputy Minister for Healthcare Ruslan Saliutin live on Channel 5. “The civil volunteer aid is always needed by our soldiers and our civil wounded, but especially soldiers,” he noted. END_OF_DOCUMENT_TOKEN_TO_BE_REPLACED

According to the Ukrainian law enforcement, the National Guard may have several tens of thousands of soldiers. One of the battalions of this department is already participating in the anti-terrorist operation, which the Ukrainian government is carrying out in the East.  END_OF_DOCUMENT_TOKEN_TO_BE_REPLACED