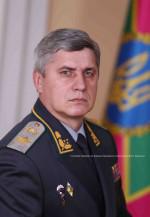 According to Lytvyn, a very difficult situation has developed on the Ukrainian-Russian border within the Luhansk and Donetsk oblasts.

“Even at this very moment at the checkpoint Marynivka, our people are fighting a brutal battle with terrorists who are attacking border guards from two directions: one armed gang attacking from the side of the Russian Kuibyshev checkpoint, and the other from Ukrainian territory,” Lytvyn said.

“The Border Guard Service has taken all possible measures to protect the Ukrainian border. However, our capacities are limited for specific reasons, which I propose we analyze later. Right now we must do everything to protect the borders of our country,” he added.

“Today I appeal once again for the immediate and necessary implementation of a set of measures to defend our state borders by all available law enforcement and security resources of the state.”

“Additionally, I request that we stop the confrontations on information in society and the discrediting of the actions of the border guard service, whose members, with weapons in hand, are protecting the interests of the state,” he said.

“We will protect our borders and our country only through the joint action of all security and law enforcement agencies. Let us, finally, defend Ukraine together,” he concluded.