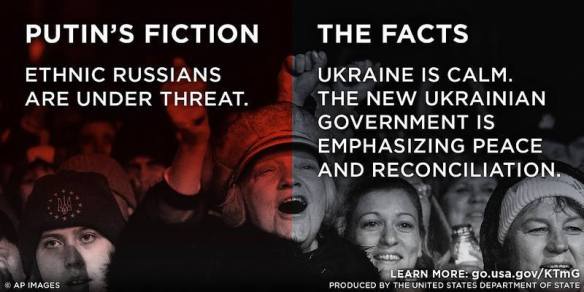 Disinformation: The Russian Ministry of Foreign Affairs consistently states that “the current Kyiv administration should curb the rampant ultra-nationalist and radical groups that are terrorizing dissidents and Russian-speaking people.”

Fact 1: Embassy teams who visited Kharkiv and Donetsk, two flashpoint cities with many Russian speakers, conclude from interviews that it is actually Russian “tourists” and local titushky thugs who have instigated violent attacks against Russian or Ukrainian speaking pro-Ukrainians. This was particularly made clear in discussions with witnesses to the Thursday, March 13 violence in Kharkiv that resulted in two dead pro-Ukrainian protesters

Fact 3: Embassy discussions with people in Donetsk indicate that they are convinced that it is pro-Russian groups who are perpetrating the attacks leading to clashes and that many of these members are actually Russian men brought in from across the border. Evidence of this is that these groups have been caught burning the Donetsk football flag in a public square – an act inconceivable to a Donchanin since the team is a singular point of pride for the football-mad city, and one of the few symbols of the city recognized internationally.