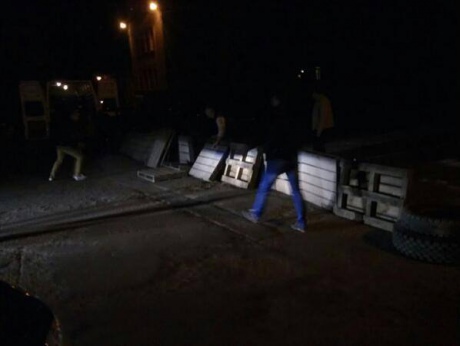 In the city of Stakhanov (Luhansk Oblast), local pro-Russian citizens have mobilized and are building a checkpoint near the local City Council. Dmitry Tymchuk announced this on his Facebook page.

“According to Information Resistance, on April 26 a group of armed extremists (about 30 people in 9 cars) left Luhansk, and their purpose was to commit provocations and sabotage in the region,” he states.

In Stakhanov, extremists have mobilized local pro-Russian forces: besides alerting local separatist leaders via the cellular network, they also burst into the headquarters of the local Mountain Rescue Service and forced them to turn off the siren.

The local branch of the Ministry of Internal Affairs has been alerted to the problem.

Eyewitnesses report that a group of armed people has surrounded the city square, and is saying that they came to ‘protect the city’ and that a protest will be held. About 30 local residents have formed a line blocking Dzerzhinsky Street leading to the city square. They have placed manhole covers in front of themselves.

Armed people are entering the local Gorky House of Culture carrying bags. Furthermore, a few locals are arguing with the new arrivals regarding the necessity of the installation of barricades, asking what are they for in a quiet place and against whom are they being installed.

Maxim Salnikov later announced, “The event seems to be ending. Everybody is leaving. The bus has left, followed by applause.” According to him, Oleksiy Koryakin was the one who spoke with the people.